I Am Public Health: Hildehardo Viado

Hildehardo (“J.R.”) Viado has been able to weave three major themes of his childhood into a career: military service, paying it forward and water. The son of a United States Navy veteran, Viado and his family moved every two to three years during his father’s 20 years of service.

“Growing up, it was great to live in various parts of the world and to learn and experience different cultures,” Viado says. “Those experiences provided me with a broadening perspective, awareness and respect for the cultural diversity that exists in our society.”

Many of those experiences took place near a source of water – oceans, rivers, bays, etc. – instilling in Viado a passion for protecting the integrity of waters systems. His parents, who grew up in the Philippines, were grateful for their opportunity to immigrate to the United States and frequently engaged Viado and his siblings in community volunteer work as a way to “pay it forward.”

“It’s very gratifying and rewarding to know that you were able to make a positive impact on someone’s welfare and being,” he says. “As I got older, I knew that I wanted a career where I can problem solve and help people.”

Combining these values with a curiosity in how things work, Viado decided to pursue a bachelor’s degree in civil engineering from The Citadel. After his 1996 graduation, he received commission in the United States Army and has spent the past two decades engaged in meaningful work, such as assisting developing nations with building and improving their water and wastewater infrastructure systems. During an assignment at the Pentagon, Viado helped develop environmental policies to improve the health of soldiers and their dependents while sustaining the environmental ecosystem/s on Army Garrisons. Between growing up in a military family and his own professional career (along with vacations; Viado is a PADI Certified Level 3 Advanced Open Water Diver), he has traveled to 33 countries and six continents (only Antarctica remains).

In 2010, Viado was selected to participate in the Army’s Long Term Health Education Training (LTHET) Program to earn a Master of Science in Public Health in Environmental Science from the Uniformed Services University of the Health Sciences. Five years after his graduation, Viado returned to the LTHET program – this time to earn a Ph.D.

Viado made his first trip to UofSC after experiencing several interviews with various universities, where the conversations about current research publications and grants made the visits begin to blend together. “Although publications and research funding are important, I was looking for something more,” he says.

Then Viado visited the Arnold School and met with environmental health sciences chair Geoff Scott and graduate director Dwayne Porter. They emphasized the Arnold School’s diverse graduate student population as well as the strong sense of community shared by faculty, staff and students. These characteristics caught Viado’s attention, but he was even more interested when the conversation turned to the impact graduate students’ research may have on the lives of others – locally, regionally and globally – and how Arnold School alumni continue to serve the public long after graduation.

“After my interview, I knew that the Arnold School was where I needed to be and where I wanted to pursue and obtain my Ph.D., and I’m very grateful and humbled to be a small part of the School’s continuing legacy of community and public service” Viado says.

As a student in the Ph.D. in Environmental Health Sciences program, Viado is researching the presence and impact of microplastics on the aquatic ecosystems found in South Carolina. With support from Scott’s National Institutes of Health-funded Center for Oceans and Human Health and Climate Change Interactions, Viado has been working with the Congaree Riverkeeper Organization and another UofSC graduate student, Louisa Schandera, as the first researchers to sample approximately 80 miles of the Midland Rivers System (Saluda, Broad, Congaree) for microplastics. He’s also sampled (or will sample) water from Lake Greenwood, South Carolina, wastewater treatment facilities and a water distribution system in Greenwood, South Carolina.

“I think it’s imperative that we understand how human activities effect our environment and how these environmental impacts can influence human health,” Viado says.

Throughout his program, Viado has continued to work closely with Scott and Porter on academic courses, research projects and professional opportunities. “Dr. Scott and Dr. Porter both have a passion and unlimited knowledge in their fields,” Viado says. “I am constantly motivated by their commitment and enthusiasm to the Arnold School and the public health profession.”

His passion for the field of public health has only grown since arriving at UofSC in 2017. “You have to be flexible and be adept with several skillsets: At times, you are a detective, forensic scientists, statistician, problem solver, research scientist, biologists, teacher\educator and a public relations expert,” says Viado, who notes that perhaps the most vital skill as a public health professional is to be an effective communicator who is able to explain the relevance and results of your work to the scientific community, general public and policy makers.

The field also encompasses one of Viado’s core values – one that it shares with the Army. “Selfless service,” he says. “Putting the needs and welfare of others in front of your own.”

After his graduation in August of 2020, Viado will join the ranks of public health professionals as a faculty member at either the Unites States Military Academy in West Point, New York or the Uniformed Services University of the Health Sciences in Bethesda, Maryland. With his engineering background, Viado would like to develop methods that reduce the amount of microplastics being reintroduced into the environment through water and wastewater systems. Long term, he would like to pursue a law degree to help him address the relationship between environmental justice and social-human health issues to ensure equity for all communities and residents. 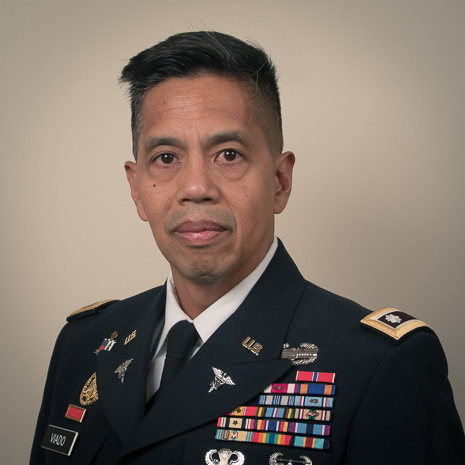 Environmental health sciences doctoral candidate Hildehardo (“J.R.”) Viado combines Army career with public health perspective to address one of his core values, selfless service – putting the needs and welfare of others at the forefront.