Growing up in a small town in northeast China, Xiaoguang (Max) and Xiaonan (Flora) Ma shared experiences, ideas, and stories—even similar personalities. They are both hard working, friendly and considerate of others—a perfect fit for careers in public health.

The children of a police officer and teacher, the siblings have been close since they were young despite a four-year age gap. They initially earned undergraduate degrees in different topics. For Max, it was a medical degree in preventive medicine. Flora studied environmental science.

Then severe acute respiratory syndrome (SARS) hit China—along with many other parts of the world. It was 2003, and Max was an undergraduate at Peking University. “During the outbreak of SARS, I was doing my internship at a hospital, and I heard and experienced many stories of SARS patients as well as the prevention and control of SARS,” says Max. “After that, I decided that public health would be my career goal.”

After completing his undergraduate degree, Max earned a master’s in public health from the University of Hong Kong. Five years later, Flora would follow in his footsteps to earn the same degree from the same institution. Her program began with a focus on air pollution and mortality, but she became more and more interested in epidemiology as she progressed through the program.

Meanwhile, Max had already moved to the United States to gain experience as a postdoctoral fellow and research assistant at the Medical College of Wisconsin. He was already two years into his doctoral program in epidemiology at the Arnold School (epidemiology and biostatistics department) when his sister was in the final stages of choosing a program for her Ph.D. in the same discipline.

“I told her the Arnold School of Public Health is an excellent and friendly place to pursue a public health degree and that there are several faculty members sharing similar research interests with her,” says Max.

“I was very interested in a project that matched my research interest,” says Flora of her decision to follow in her brother’s footsteps a second time. “I also heard substantial positive comments on the mentors at USC.”

One of those mentors, Angela Liese, proved to be an important influence on both Max and Flora. “I strongly recommended my supervisor, professor Liese, to her,” says Max. “Dr. Liese is a very nice, super organized, and excellent scholar in her research fields who would be a very good supervisor, and I believed Flora would learn a lot from her for both science and life.”

“She is attentive to students’ needs and has substantial experience in training graduate students,” adds Flora. “Learning from her, I know how I will act as a mentor and how I should arrange my materials in future.”

During the program, each of the Ma siblings refined their areas of expertise. Max focused on chronic disease prevention, spatial epidemiology and food environment, and nutritional epidemiology, obesity and body composition. He rounded out his experiences at the Arnold School with a postdoctoral fellowship with the Center for Research in Nutrition and Health Disparities, which he completed in 2014, and then accepted an associate professor position at Zhejiang University in the School of Public Health’s department of nutrition and food hygiene.

Flora developed research interests in epidemiology and obesity studies, spatial food access, food shopping behavior/patterns, food security and policy interventions, air pollution, environmental impacts, and application of geographic information system (i.e., mapping) in public health. After her graduation, she plans to pursue a postdoctoral fellowship and then a position in academia like her brother.

Long term? They would both like to help change the lives of the Chinese population through the power of improving public health. 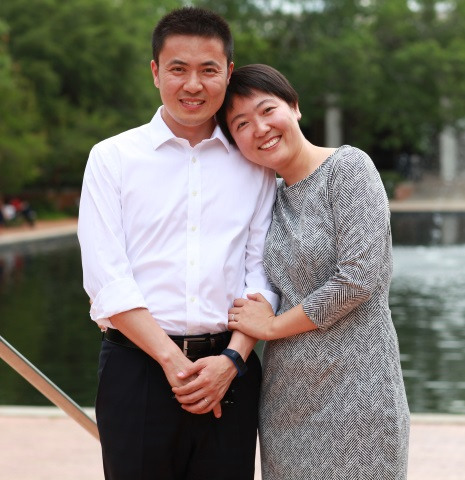 Max (left) and Flora Ma both earned master's degrees in public health at the University of Hong Kong. After Flora's graduation from USC, they will both be alumni of the Arnold School's Ph.D. in epidemiology program.